As soon as my son and I heard the thunk, we both said “Was that a bird?”
It was. A tiny Ruby-crowned Kinglet had flown into the sliding glass door and lay on the deck.
What do we do? What can we do?
While we watched, the little bird got to his feet. But he was not well.

The tiny bird sat stunned on the deck.

He wobbled around a bit and panted hard.

Finally, he fluffed up all his feathers and tucked his head in and made himself into a tiny feathered ball. 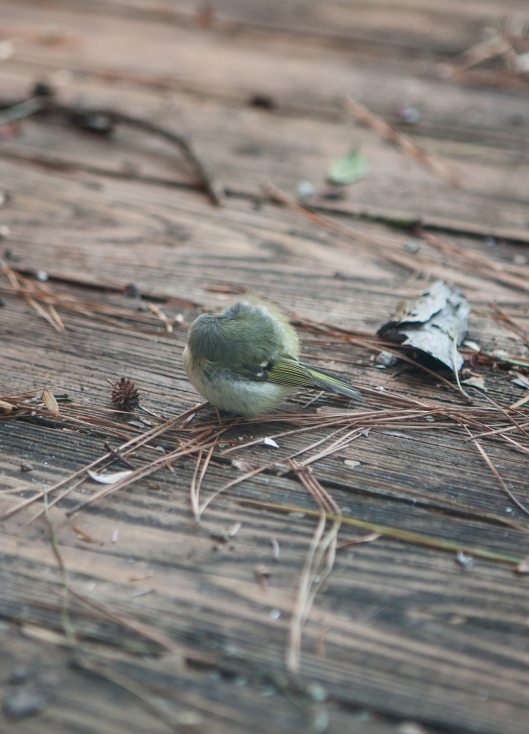 The Ruby-crowned Kinglet fluffed up his feathers and curled into a little ball.

His breath came in shudders and heaves. We watched in distress.

The tiny Kinglet shuddered so hard I feared he was dying.

It was so cold outside. Would he be ok? We were very glad the cats were inside!  Cats love birds so of course Matey purred with glee and wouldn’t take her eyes off the little bird through the glass. We finally put Matey in the basement out of annoyance of her and respect for the bird. He kept his head tucked in, shuddering and quaking and I kept expecting the little feathered ball to fall over.

Alone yet not alone.

We looked up info on what to do. The advice was to carefully lift the bird into a box lined with a towel and wait. So that’s what we did. My son lifted the little feathered ball and placed it in the box, then backed into the house and slid the glass door shut. The bird stood up and balanced and revived in the warm towel-lined box. Then we waited, watching his every move.

The tiny Kinglet stood up and we got a glimpse of his beautiful ruby crown.

The little Kinglet looked around for a couple minutes and without even testing his wings, suddenly flew away.

We were so glad the bird was ok! There’s not much you can do for a bird that crashes into a window and sometimes the bird will be stunned for hours. The little Kinglet was on the deck for barely 20 minutes in all.

I was glad the cats were indoors and shut in the basement.
I was glad we were able to look up info online.
It was good that we had a box and a towel to help warm the stunned bird.
And though we couldn’t do much to help, we hovered over it with concern.

Then I remembered what Jesus said.
“For this reason I say to you, do not be worried about your life, as to what you will eat or what you will drink; nor for your body, as to what you will put on. Is not life more than food, and the body more than clothing? Look at the birds of the air, that they do not sow, nor reap nor gather into barns, and yet your heavenly Father feeds them. Are you not worth much more than they?”

If God cares so much for tiny birds that he made sure we kept the cats locked up and provided a warm towel, surely he will hover over us when we are curled up and in need of care.

Casting all your care upon him; for he careth for you.
I Peter 5:7

3 thoughts on “When a bird needs a little help….”