Recently I read a book about a woman who was able to pull out of a dark depression by realizing she had much to be thankful for. A friend challenged her to list one thousand gifts, one thousand things that she was thankful for. Ever since “gratitude journals” became popular years ago, I’ve been wanting to make one.

I’ve always wanted a space to write down just the “and it was very good” and “she was pleased” stuff. I’ve wanted to write a book that was one giant exhalation of praise and thanksgiving, words that can be inhaled like fresh oxygen, a forever document of the things I am truly thankful to God for.

I found the perfect book to alter at a used book store. The original title was “The Princess Elizabeth Gift Book”. With a little paint and glitter, I turned the book into “The Princess’s One Thousand Gifts Book”, in which I will list one thousand and more things I am thankful for.

After cutting off the covers from the book, I cut out the initial “E” and removed the name “Elizabeth” from the cover. I added old rhinestones to the crown on the cover. 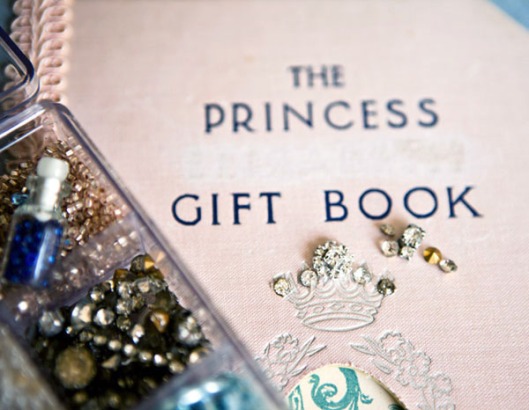 The name "Elizabeth" has been removed from the book title. Rhinestones are glued into the crown emblem.

The binding is simple, just holes punched through the cover and all the blank pages within, then tied with a cord. For closure, I punched holes in the back cover and added a covered button to the front. 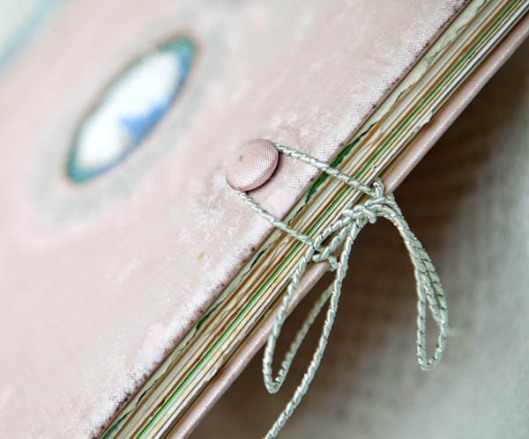 A cord loop from the back cover is placed over the covered button on the front. The ends of the cord exit from inside the back cover and are tied around the loop when the book is closed.

Dozens of blank pages are sketchbook paper and sheets of vintage wallpaper.

To finish the book, I added text to the title, sponged pink and brown paint on the cover and set a resin cameo in the cover, surrounded by glass glitter. I’m looking forward to listing things I am thankful for. 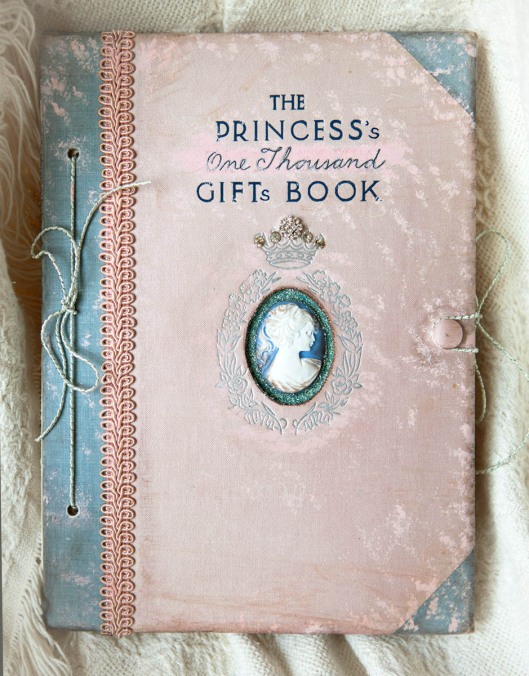 The Princess's One Thousand Gifts Book.

1 thought on “The Princess’s One Thousand Gifts Journal”